CST STUDIO SUITE® is a collection of electromagnetic simulation software. It is an integrated design environment that contains tools for the design and optimization of devices in a wide range of frequencies from static to optical. CST Studio Suite® gives customers the choice of multiple powerful solver modules, including modules based on numerous different methods including finite element method (FEM), method of moments (MoM), multilevel fast multipole method (MLFMM) and shooting boundary ray (SBR), each offering distinct advantages in their own domains.

This is an example of the response of a boron and gallium-doped silicon wafer solved in the time domain.

This model uses 4 million mesh cells. The following image shows a schematic of the silicon wafer model. The transient impedance response of an electrical lead is also shown below.

This model used 48,608 mesh cells. The Ludwig-3 horizontal polarization image below shows the resultant radiation pattern emitted by the antenna. 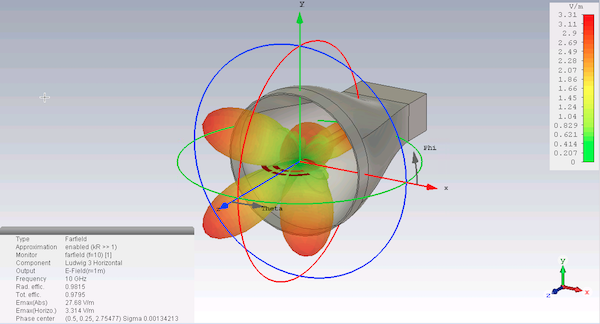 CST EM STUDIO® (CST EMS) is dedicated to the simulation of static and low frequency devices. Embedded in the same CST user interface, CST EMS features a variety of solver module to tackle electrostatics, magnetostatics, current flow and low frequency problems, and can be coupled to other CST STUDIO SUITE® modules for charged particle and multiphysics simulations.

This is an example of an electromagnetic radiation simulation through an RJ45 connector. A 1V potential is applied to the end of RJ45 contacts. Every other wire is connected to a metallic ground plane.

This model used 198,240 mesh cells. The electric potential through the RJ45 connector is shown below. 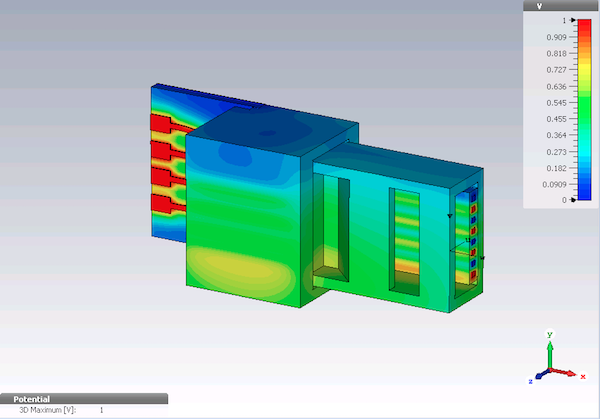 CST PARTICLE STUDIO is a specialist tool for the fast and accurate analysis of charged particle dynamics in 3D electromagnetic fields. Powerful and versatile, it is suitable for tasks ranging from designing magnetrons and tuning electron tubes to modeling particle sources and accelerator components.

The particle tracking solver can model the behavior of particles through static fields, and with the gun iteration, space charge limited emission. The particle-in-cell (PIC) solver, which works in the time domain, can perform a fully consistent simulation of particles and electromagnetic fields. For relativistic applications, the wakefield solver can calculate how the fields generated by particles traveling at (or close to) the speed of light interact with the structure around them.

This is an example of a stationary particle tracking solution in an electromagnetic field. This model used 150,336 mesh cells. The trajectories of charged particles from a multibeam gun emitter is shown below. 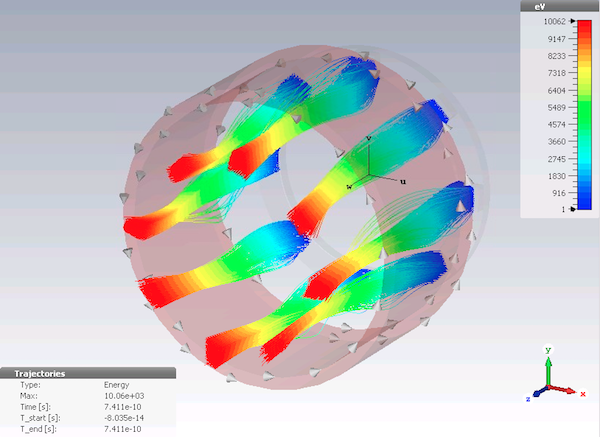